Each racing team features programmers responsible for customizing the algorithms within the self-driving software that controls these autonomous vehicles.

Competitions within the series even include self-driving cars versus human drivers.

Narrator: By now, the world is well aware that self-driving cars are getting closer to becoming a reality. However, not everyone has heard about self-driving race cars. The up-and-coming motor sport known as autonomous racing is currently being led by Roborace, a series that features all-electric self-driving race cars. The competition is designed to provide each race team with identical cars, featuring the same powertrain and chassis, as well as the same basic self-driving software; however, the teams are responsible for customizing and improving the algorithms that ultimately control the cars and allow them to navigate multiple racetracks on their own. While fans of other racing series fawn over world-class drivers, in Roborace it’s programmers who are the real stars.

The company’s prized Robocar, a completely driverless and fully autonomous vehicle, already proved just what it’s capable of at last year’s Goodwood Festival of Speed when it became the first self-driving race car to complete the event’s famous hill climb. With the inaugural season now underway, we caught up with Roborace’s chief strategy officer, Bryn Balcombe, to get the inside scoop on everything racing fans need to know about the company and this unique new motor sport.

Bryn Balcombe: Roborace is a completely new type of motor sport that we’ve been developing for the last 2 1/2 years, focusing on the mega-trends that are happening in the automotive industry, so electric, connected, and autonomous technologies. How does motor sport play a role in developing that for the future, showcasing the technology, and building trust with the public.

So this year, we’re running something called Season Alpha, and Season Alpha is our experimental year, where we’re looking at lots of different formats, lots of different types of competition. The main thing is to drive the advancement in the software. That’s what we’re focused on this year. So anything that we find creates competition between the teams and moves that software development further forward, that’s what we’re focused on.

Narrator: Roborace currently features two vehicles in its fleet: the Robocar, and DevBot, the company’s development robot that serves as a platform for testing new technology and software. Unlike Robocar, though, DevBot has room for a driver as well.

Bryn: We’re focused now on DevBot and using that as the development platform, but the target is to be able to take that software and use it in Robocar. We’re running with DevBot 2.0 in Season Alpha, which gives us the opportunity to use humans within those competition formats. In previous years where we’ve done human versus machine competitions, some that we’re looking at this year experiment with having human in for part of the race and AI for the second part, some are pure AI races only. So when we’ve done human versus machine competitions, it’s been really interesting, No. 1, to see the human’s reaction, that they want to beat the robot. There’s that competitive element there. And then, No. 2, from the AI teams, who really want to get as close to and then eventually beat the human drivers. So they’re probably about 5-10% away at the moment, before we get to the human level of performance.

Narrator: So what kind of tech allows these impressive machines to drive on their own?

Bryn: So we’ve got exactly the same types of sensors and computer that you’ll find in the autonomous-vehicle industry that’s being developed by companies such as Waymo, for example. So we’re running lidar, radar, machine-vision cameras, sonar. We have an accurate GPS inertial system that’s so accurate you could do missile guidance with it. So we have export restrictions on those products, some of those products. But yeah, it’s exactly the same as you would use on the road. And that’s really key for us is that the technology that’s developed in competition here at our racetrack transfers to that road industry. 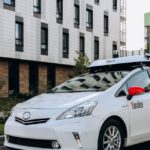