The Livermore Amador Valley Transit Authority is now offering rides to the public on its shared autonomous vehicle. Reservations are required. (Contributed photo)

Livermore Amador Valley Transit Authority is driving change on local roads and inviting the public to hop aboard its shared autonomous vehicle (SAV) for the first time earlier this month.

The self-driving vehicle, which started service Nov. 16, was certified for use on public streets by the National Highway Traffic Safety Administration after recently undergoing rigorous testing.

“As it progresses, LAVTA’s SAV project will improve mobility by providing first- and last-mile solutions for passengers between the eastern Dublin-Pleasanton BART Station and nearby locations,” officials said in a statement.

A human safety operator will be on board the SAV at all times; the vehicle will take an initial route just under one mile with two stops and one traffic light, operating in mixed traffic the entire time. The SAV is 100% electric and is equipped with a camera, sensors and GPS.

During this initial period, the SAV will operate Mondays through Fridays from 10 a.m. to 2 p.m., excluding holidays. Each complete round trip will take approximately 10 minutes, according to LAVTA. The boarding location is in close proximity to the Dublin-Pleasanton BART Station, where LAVTA’s bus transfer facility is also available. Nearby parking is also available at Iron Horse Parkway. 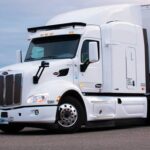