Google affiliate Waymo is viewed as a global leader in self-driving technology, while the Nissan-Renault-Mitsubishi alliance logged combined sales of 10.8 million vehicles worldwide in 2018. TOKYO — The alliance of Nissan Motor , Renault and Mitsubishi Motors plans to join Google’s camp for developing autonomous taxis and other services using self-driving vehicles, Nikkei has learned.

The automakers intend to work with Waymo, a Google spinoff that is among the leaders in technology for self-driving cars. The companies are in the final phase of talks, and plan to announce the arrangement as early as spring.

The partnership would unite a car alliance whose global sales totaled 10.8 million automobiles in 2018 with a developer whose self-driving vehicles have traveled over 10 million miles on U.S. public roads as of October. Waymo has forged similar deals with Fiat Chrysler Automobiles and Jaguar Land Rover, but the Nissan-Renault alliance boasts greater scale.

Nissan’s pivot to embrace a major outside partner in self-driving marks an attempt to catch up in a field where the alliance trails rivals. BMW and Ford Motor plan to have fully automated driving systems commercialized around 2021, a year ahead of Nissan’s 2022 goal.

The alliance and Waymo will cooperate in what is known as mobility as a service, or MaaS, a shift from vehicle ownership to the use of on-demand transportation. Possibilities include developing a fleet of driverless taxis using Nissan vehicles and a system that handles reservation and payments. A Waymo self-driving minivan cruises along a road.

The Google spinoff has started a driverless taxi service in the U.S. (Source: Waymo) Waymo debuted a commercial self-driving taxi service in the western U.S. city of Phoenix late last year. The Renault alliance’s strong presence in electric cars offers the Google affiliate a chance to be at the forefront of establishing standards […] 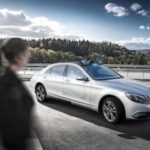