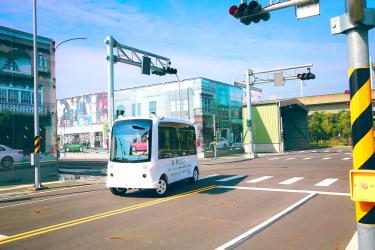 The Ministry of Economic Affairs is reviewing a proposal for a self-driving bus in Taipei that would begin testing on Xinyi Road and open for a public trial as early as the second quarter next year.

“If road test results are good, we will open it for passengers to ride,” Taipei Department of Transportation Director Chen Hsueh-tai (陳學台) said on Saturday.

Road tests and possible future operations would occur after midnight, when Taipei’s MRT railway system or buses are unavailable, he said.

The project was proposed by Turning Drive Inc, a local company that has run two successful tests at Taichung-based Lihpao Land (麗寶樂園) and the Taoyuan Agriculture Expo, he said.

Running on Xinyi Road’s bus lane late at night requires no lane changing and affects fewer people during the test period, he added.

The Ministry of Transportation and Communications would issue a trial bus plate after the proposal is approved, followed by a testing period of two to three months from 12:01am to 2am, before opening bus for free public trails from 12:01am to 5am, he said.

Sensors would be installed at wider intersections to help the bus to recognize traffic signs, and the testing speed would be set at 30kph, department officials said, adding that the law requires a staff member to ride the bus for manual intervention in the case of an emergency.

Cameras installed on the bus would monitor real-time traffic situations and report driving conditions to Turning Drive and the city government, they said.

Taiwan would follow a global trend in limiting the buses to late-night operation, as current technology is not mature enough yet to run them during the day, Chen said.