TOKYO – Toyota, aiming to transform itself into a software company as much as it is a hardware one, is creating a new holding company that will spearhead development of self-driving cars, new automotive computer operating systems and advanced mapping.

The entity, called Woven Planet Holdings, will oversee two other companies, Woven Core and Woven Alpha. Woven Core will focus on automated driving. Woven Alpha will pioneer news businesses in such fields as connectivity, onboard software and high-definition mapping.

Toyota announced the initiative on Tuesday, saying the new companies will begin operations in January. James Kuffner, who is currently the CEO of TRI-AD, will lead all three companies, which will be based in TRI-AD’s current office space in downtown Tokyo.

Kuffner was appointed a board member of parent company Toyota in June, underscoring the Japanese automaker’s prioritization of breaking into the software sector. He joined the company in 2016 after working on robotics and the self-driving car project at Google.

In an interview with Automotive News earlier this month, Kuffner said Toyota aims to be as strong in delivering reliable, robust software as it is at delivering durable, quality cars.

“Toyota has a long history of building an excellent, reliable products and hardware, but building software is something that is a new capability for many traditional automakers,” Kuffner said.

“My mission is really to create a strong software center of excellence within the Toyota group at Toyota Research Institute – Advanced Development and, working with our other partners, and create products that have both good hardware and good software together,” he said. Toyota said one goal is to create a more agile “software-first” development process for cars.

Toyota’s push to strengthen its software firepower comes as rivals make similar moves in an attempt to streamline the complicated computer systems that run their cars and have them interact more seamlessly with the vehicles’ mechanical and electronic architectures.

Volkswagen Group, for instance, said all its new models will run on a new vw.os operating system by 2025 and last year unified its fragmented information technology units into a $8 billion subsidiary called Car.Software that is tasked with developing such computer systems in-house.

German supplier Robert Bosch, meanwhile, said this month it would combine its global automotive software and electronics activities into a new division called Cross-Domain Computing Solutions. It will launch at the start of the new year with 17,000 employees focused on automotive software.

Toyota’s Woven Planet and its Woven Core and Woven Alpha operating companies take their names from the Japanese carmaker’s so-called Woven City that it announced in January. Woven City is a prototype city of tomorrow that is being built at the base of Mount Fuji as a kind of living test bed for future connectivity, artificial intelligence and new mobility businesses.

Toyota intentionally left its corporate name off the new ventures in a bid to make the businesses more inviting to partners who might be turned off by directly joining a Toyota operation. After launching the new Woven companies, Toyota will stop using the TRI-AD name.

Among the products that will be pursued by the Woven companies will be Arene, a new open automotive operating system that will allow for “programmable cars.” The companies will also work with partners on an Automated Mapping Platform, an open software system that allows companies to create the ultra-detailed, high-precision maps needed for automated driving.

Woven Core, it its role as the TRI-AD successor company, will take the baton in continuing to develop automated driving technologies, such as the Teammate system that will debut later this year in a refresh of the Lexus LS premium sedan. That is a lidar-based Level 2 setup that can automatically change lanes and pass other vehicles in highway driving.

In reorganizing TRI-AD under the Woven banner, Toyota is positioning the group for rapid expansion. About 560 people work at TRI-AD today, and the unit said it had targeted 1,000 employees. Toyota said it will need more people, but it hasn’t given a new figure.

The shareholding structure of the new Woven group has yet to be determined, Toyota said. TRI-AD was founded in 2018 as $2.8 billion partnership between Toyota and its top suppliers. Toyota holds 90 percent, while group parts makers Aisin Seiki and Denso each own 5 percent. 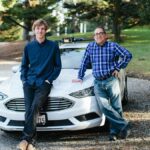