Given so many announcements and new information that came out at the GCT 2021, I think it’s worth a summary and some analysis.

Nvidia made so many announcements and offered so much new information about so many different things at its GTC 2021 last week, it’s hard to digest it all. Given that, I think it’s worth compiling just the news pertaining to the automotive market, and summarizing and analyzing it. The virtual conference, quite popular with over 150,000 registered attendees, had about 1,500 sessions with 10% covering automotive topics.

The following table summarizes the announcements during Nvidia CEO Jensen Huang’s keynote and the many press releases that Nvidia published that impact the automotive industry. There was a lot of information on Nvidia Drive design wins that is covered in this column. My last column summarizing autonomous vehicle (AV) software platform design wins will give you additional perspectives.

Atlan
At GTC 2021, Nvidia revealed Atlan — its next-generation processor for Nvidia Drive-based AVs. Nvidia claims Atlan will deliver over 1,000 TOPS (trillion operations per second). Nvidia expects auto OEMs to use Atlan for 2025 models. Atlan may sound like an early announcement but this follows the traditional planning for auto model developments timeline of four to seven years.

Atlan is the first SoC to be equipped with an Nvidia BlueField DPU for extra security, advanced networking and storage services. The BlueField DPU includes ConnectX network adapter with an array of Arm cores and offers purpose-built hardware acceleration engines. It has programmability for high-level security to minimize data breaches and counteract cyberattacks.

The Atlan architecture and performance should give the auto OEMs, Tier 1s and AV software platform companies the capabilities to build software-defined vehicles to meet future demand for OTA, cybersecurity, SaaS and cloud services plus emerging AV safety standards and regulation.

Orin is Nvidia’s current top performance SoC for new ADAS and AV projects with volume availability in 2022. The Orin SoC achieves up to 254 TOPS and can handle the applications and deep neural networks that run simultaneously in autonomous vehicles. Orin meets safety standards such as ISO 26262 ASIL-D. Currently the Xavier SoC with 30 TOPS peak performance, is the mainstay for autos using Nvidia Drive hardware systems and will remain important for several more years.

Hyperion 8
Nvidia Drive Hyperion is a fully operational, production-ready and open AV platform that cuts down the amount of time and cost required to outfit vehicles with the technology for AV testing. The eighth-generation Hyperion platform includes the sensors, HPC and software needed for AV development, all verified, calibrated and synchronized right out of the box.

Drive Sim
At his keynote at GTC, Nvidia founder and CEO Jensen Huang announced the next generation of autonomous vehicle simulation, Nvidia Drive Sim, which will be available to developers via an early access program this summer. Drive Sim is a cloud-based simulation platform and can generate datasets to train a vehicle’s perception system or provide a virtual proving ground to test the vehicle’s decision-making and control logic.

The platform can be connected to the AV stack in software-in-the-loop or hardware-in-the-loop configurations. Drive Sim comes with a library of configurable models for environments, scenarios, vehicles, sensors and traffic.

It also includes dedicated APIs that enable developers to build Drive Sim connectors, plugins, and extensions to tailor the simulation experience to specific requirements and workflows. These APIs make it possible to leverage past development by allowing integration into pre-established AV simulation tools. The APIs are also creating a broad ecosystem of simulation partners.

Robotaxi design wins
Nvidia has done very well in design wins for robotaxis. Of all the AV use-cases, robotaxis have the largest long-term revenue potential, but real market take-off remains at least five years away. In the meantime, robotaxi testing is accelerating and Nvidia’s current design win customers are likely to become the leaders when volume robotaxi usage starts.

Aurora is also using Nvidia hardware platforms and is likely to be supplying AV software to robotaxi companies—with Uber as the most likely customer due to Arora acquiring Uber ATG last December. For more information see: Breaking down Aurora-Uber ATG Deal | EE Times.

Plus has design wins with two truck OEMs: FAW and Iveco. FAW is a leading Chinese manufacturer of cars, buses and trucks — small, medium and large. FAW will start production of Nvidia Drive-based trucks later in 2021 and will upgrade to Orin in 2022. Iveco is an Italian truck maker and announced its L4 truck development with Plus on April 12, 2021.

Car OEM design wins
Nvidia has key design wins with car OEMs with most being for ADAS systems. Many of the design wins are with EV manufacturers including many Chinese BEV startups that are using ADAS products and future AV capabilities. The BEV list includes Faraday Future, Li Auto, Nio, SAIC (two new BEV brands), Vinfast and Xpeng.

Li Auto is developing next-gen BEVs using Nvidia Drive Orin with plans to ship in 2022. It is developed with Tier-1 supplier Desay and will have L2-L3 features and an extended battery range.

SAIC, China’s largest automaker, is readying two new BEV brands. The R Auto will use Nvidia Drive Orin, to run perception, sensor fusion and automated driving. SAIC’s ultra-premium IM brand is a joint venture with Alibaba. IM will deliver long-range BEVs powered by Nvidia Drive Orin, including a sedan and SUV with autonomous parking and other automated driving features. Sedan orders can be placed now, with SUV orders following in 2022.

Vietnam’s Vinfast, a BEV startup, is planning to launch L2-L3 vehicles in 2022. These vehicles will use Nvidia Drive Xavier and Nvidia Drive Orin in the future.

At the GTC 2021, Volvo Cars announced it will use Nvidia Drive based on its Orin SoC across its models in its next generation cars. Volvo has used Nvidia Drive since 2016 for AV development.

Nvidia’s most important car OEM customer is Mercedes-Benz, that is expected to use Nvidia Drive for ADAS functions in all its vehicles and eventually for AVs. On April 16, 2021, Mercedes-Benz announced its most advanced BEV—the EQS with a range of over 470 miles and over 500 horsepower.

The EQS will be capable of L3 automated driving and is using Nvidia Drive starting in 2024. The EQS also has the impressive MBUX Hyperscreen display system with 55-inch screen, which is also implemented with Nvidia processors. The EQS will arrive at U.S. dealerships this summer.

Nvidia Drive design-win value
Nvidia announced its design-win pipeline for Nvidia Drive now totals over $8 billion over the next six years. This is a combination of Nvidia hardware and software for cockpit and ADAS-AVs. Nvidia has stated that per car content ranges from under one hundred to thousands per vehicle depending on the program. The revenue is from customers for cars, trucks, robotaxis and BEVs.

It is speculative to estimate Nvidia’s system shipments from the above numbers, but I will do a simple back-of-the-envelope calculation. I will assume an average price per system and use three guesstimates—low, high and middle.

Nvidia automotive success
There are multiple reasons for Nvidia’s growing success in automotive systems such as AV development, ADAS and display-based infotainment systems.

This article was originally published on EE Times.

Egil Juliussen has over 35 years’ experience in the high-tech and automotive industries. Most recently he was director of research at the automotive technology group of IHS Markit. His latest research was focused on autonomous vehicles and mobility-as-a-service. He was co-founder of Telematics Research Group, which was acquired by iSuppli (IHS acquired iSuppli in 2010); before that he co-founded Future Computing and Computer Industry Almanac. Previously, Dr. Juliussen was with Texas Instruments where he was a strategic and product planner for microprocessors and PCs. He is the author of over 700 papers, reports and conference presentations. He received B.S., M.S., and Ph.D. degrees in electrical engineering from Purdue University, and is a member of SAE and IEEE. 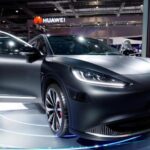