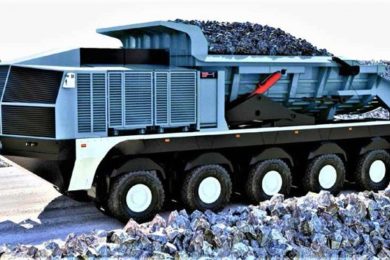 Behault is a Belgian, Limburg-based technology group that engineers, designs, patents and licenses proprietary innovative technology which it says is related to the “development of cyber-physical and situational awareness systems” that find their application among others, in the Behault Mining® battery electric (HBEV/BEV), (semi-) autonomous surface mining haulage truck.

These innovations, initially developed for surface mining find their origin in advanced and ruggedised electro-optical instruments and have additional applications outside mining in autonomous security, shipping, automotive, UAVs (drones) and other industries. This first funding round, for which €450,000 has been raised from Belgian tech investors, was focused on the filing of patents under the international Patent Cooperation Treaty (PCT) to protect the technological innovations underlying the disruptive commercial business case, which it says have been validated by international clients.

One technology specifically, the Situational Awareness System (SAS), will be spun-off for the further licensed development and commercialisation of the technology as it is a prime candidate Behault says “to disrupt the race to full autonomous vehicles by companies such as Waymo, Tesla & Cruise in automotive and Caterpillar, Komatsu and BELAZ within the mining industry.”

The SAS, which is comprised of an innovative patented sensor pack and forms the “eyes” of the proprietary autonomous system, Behault says provides “superhuman” vision that can fast track the progress towards the coveted Level 5 of autonomy for autonomous equipment and vehicles in the mining, inland waterway shipping, UAVs and automotive industries.

The statement said: “Combined with Behault’s Cyber-Physical System – the ‘brains’ – it offers a turn-key solution for automation. Additionally, the richness of the generated, real-time multi-dimensional data-set enables a plethora of applications within all kind of industries. Behault’s SAS outperforms any system on the market today in terms of spatial resolution and all-weather 24/7/365 performance. Behault is closing its second funding round focused on the filing of patents under PCT. Investor opportunities for the commercialisation of the autonomous system will be announced shortly.”