There are a handful of major players in the race to fully self-driving robotaxis. One of those is Mobileye, now owned by Intel after a record-breaking acquisition in 2017. News this month out of Japan is that Mobileye is partnering with WILLER, an unfamiliar name to an American like me but apparently “one of the largest transportation operators in Japan, Taiwan and the Southeast Asian region,” in order to launch robotaxi service in Japan, Taiwan, and elsewhere in Southeast Asian.

The partnership does jump straight to home base, as it starts with testing in 2021, but the announcement was direct in saying the plan is to roll out self-driving taxis (robotaxis) and “autonomous on-demand shared shuttles.” That is expected to happen in 2023.

Interestingly, Mobileye isn’t just delivering self-driving tech, but actually the entire vehicles. That’s intriguing, so I’ll come back to it in a moment. On WILLER’s side, it will “offer services adjusted to each region and user tastes, ensure regulatory framework, and provide mobility services and solutions for fleet operation companies.” So, it’s basically dealing with the lawyers/governments and operations.

The plan is to have 100% “self-driving ride-hailing and ride-sharing mobility services” on Japanese roads in 2023, and then expansion into Taiwan and other Southeast Asian markets after that. “For Mobileye, the collaboration with WILLER advances the company’s global mobility-as-a-service (MaaS) ambitions,” Mobileye/Intel announced.

“Since announcing its intention to become a complete mobility provider, Mobileye has begun a series of collaborations with cities, transportation agencies and mobility technology companies to develop and deploy self-driving mobility solutions in key markets. The agreement with WILLER builds on Mobileye’s existing MaaS partnerships. Examples include the agreement with Daegu Metropolitan City, South Korea, to deploy robotaxis based on Mobileye’s self-driving system, and the joint venture with Volkswagen and Champion Motors to operate an autonomous ride-hailing fleet in Israel. The collaboration with WILLER greatly expands and strengthens the company’s global MaaS ambition.”

WILLER has been working on providing a uniform MaaS app across major regions, lowering the cost by unifying different apps, services, and transportation methods under one umbrella. “WILLER aims to unify user experiences across countries in the region; it released a MaaS app in 2019 and enabled a QR-code-based payment system this year. WILLER has partnered with Kuo-Kuang Motor Transportation, the largest bus operator in Taiwan, and Mai Linh, the largest taxi company in Vietnam, as well as invested in Car Club, a car-sharing service provider in Singapore. WILLER also partners with 150 local transportation providers in Japan. On top of these partnerships, WILLER will provide self-driving ride-hailing and ride-sharing services in the region and provide the best customer-ride experiences together with Mobileye.”

In some of our previous coverage of Mobileye, we’ve written that the self-driving tech firm is working closely with Ford, NIO, several other automakers. Of course, Mobileye itself doesn’t produce vehicles. So, it was surprising and intriguing that the announcement indicated Mobileye would be providing the vehicles. Perhaps its relationship with Ford or NIO, or some other OEM, will be tapped for this. Perhaps Mobileye will simply buy some vehicles — from an existing partner or some other OEM — and then integrate the tech for WILLER. A third option, which I think is very unlikely, is that Mobileye will get into some level of auto production. Again, I think that is very unlikely — but it is the 2020s now, isn’t it? Stranger things have happened.

While it does seem that a robotaxi article is a dime a dozen these days, and we’ve certainly seen bold claims about self-driving vehicles for years (ahem, Tesla), Mobileye has historically been quite cautious about robotaxis timelines or claims. So, I find it a little uplifting and stimulating that this partnership announcement puts a clear target of 2023 for full-blown robotaxi service in Japan. Two and a half or three years out is certainly far enough out to indicate the tech isn’t close to ready, but it’s close enough to imply that a cautious company like Mobileye is confident in its path.

Also, there is no indication that WILLER is interested in a partnership that just entails driver-assist technologies. The order is for self-driving vehicles, robotaxis and self-driving shuttles in fact. 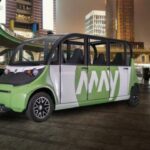