The age of self-driving 18-wheelers traveling on U.S. highways may be much closer than many people realize, and North Texas is emerging as the likely location of a major hub for the trucks.

One company that is aggressively working to build a nationwide freight network of driverless trucks is TuSimple, which has offices in Beijing and San Diego.

The trucks’ cameras and sensors provide vast amounts of data so the vehicle’s computer software knows what’s happening up to 3,000 feet up the road, and can react to emergencies 10 times faster than a typical human.

For now, TuMobile is operating the self-driving trucks with a safety operator in the driver seat who can take the controls if needed, and a test engineer in the passenger seat to monitor the onboard cyber system.

But the company plans to begin operating its trucks with no human in the cab possibly as early as next year on selected routes — including routes in Texas.

Driverless cars are already legal on Texas roads. In 2017, the state Legislature passed a law that allows automated motor vehicles to use Texas highways as long as the vehicles are insured and equipped with video-recording equipment.

TuSimple is already running self-driving trucks from Arizona to West Texas, and the new Fort Worth hub will help the company extend its network to Austin, San Antonio and Houston.

The company aims to have its nationwide network in place by 2023.

Bell, BNSF and Deloitte are among the companies doing work in the zone, which provides easy access to Interstate 35 and other highways, the BNSF Intermodal Yard and the aviation hub at Alliance Airport.

TuSimple also is backed by UPS, another shipping company with a ground hub at AllianceTexas.

“TuSimple is building the world’s first autonomous freight network and an important part of our strategy is to secure suitable locations for our terminals, and the Mobility Innovation Zone (MIZ) is exactly what we were looking for,” Lee White, TuSimple vice president of strategy, said in an e-mail.

Generally, the idea behind TuSimple’s version of freight movement is to get goods from ports — including goods that often arrive at seaports such as those in the Los Angeles area and are then shipped to Texas by rail — to regional distribution centers across the U.S.

Construction on TuSimple’s Alliance hub is underway and expected to be completed by March. The logistics center will include autonomous truck operations, service bays and office space.

“TuSimple is the perfect partner for Hillwood in our efforts to accelerate innovative mobility technologies within the MIZ,” said Ross Perot Jr., chairman of Hillwood, the company that is developing and managing AllianceTexas.

“As the industry leader in the deployment of autonomous long-haul truck routes, TuSimple brings this technology to AllianceTexas today, ensuring the MIZ will be a global focal point in the commercialization of next-generation logistics solutions,” Perot said.

Transportation and logistics is a $1.8 trillion business, said Russell Laughlin, Hillwood executive vice president. Companies that specialize in moving goods across the country are working fiercely to bring down shipping costs by reducing inefficiencies in the system, and they believe automated trucks will be a critical part of their success, he said.

The COVID pandemic has exposed some of those inefficiencies, as companies such as Amazon and Walmart have at times struggled to meet customers’ demands to have goods shipped directly to their homes — making the improvement of the freight network an even more pressing matter.

More From: Basics of Self-Driving Vehicles 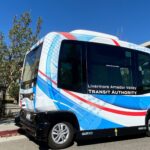