The company was founded in 2018 by CEO Alden Woodrow and a group of engineers and product designers from Google, Apple Inc. and Uber Technologies Inc.

NFI, Ryder and DHL are working with Ike to install its automated system in their trucks. (Ike)

“What Ike is doing is putting our technology into the hands of existing fleets and making them more productive, safer, and create better jobs for their drivers,” Woodrow told Transport Topics. “We set out more than a year ago to find like-minded partners who understand the approach we’re taking, who saw the opportunity with the technology, and who wanted to be partners. [We sought] forward-thinking companies to invest their time and effort for a technology that is still a few years away from being commercially available.”

Ike’s business model calls for these companies and others to buy trucks from the industry’s OEMs with Ike’s hardware and software already installed.

Woodrow says the company now is mapping out high-traffic, interstate freight routes in the Southwest and western U.S. where the weather is favorable for Level 4 autonomous vehicles to operate year-round.

Some of the potential routes include I-10 between Phoenix and Los Angeles and I-45 between Dallas and Houston.

“We’ve got these corridors already set up perfectly for this type of an application,” DHL Supply Chain President Jim Monkmeyer told TT. “We’ve got to figure out the sweet spot where autonomous trucks will work.”

Level 4 autonomous technology allows for the hardware and software to drive the vehicle most of the time, with a qualified driver monitoring the truck.

While on the interstate, the automated system will do the driving, but as the truck comes off the divided highway and onto state or local roads, it will hand off operations to the driver, who will cover the final distance to the warehouse, distribution center or store for the delivery or pickup.

“We’re expecting our technology will power automated trucks that operate only on the highway,” Woodrow said. “Truck drivers are really good at a bunch of things, and they’ll continue to be good at those things for some time. If you look at a driver operating in an industrial yard, that is very hard to duplicate, or operating on surface streets and arterial streets.”

In 2019, Ike became the first company to submit a Voluntary Safety Self Assessment to the Department of Transportation before testing its automation system on public roads, according to the tech firm.

Woodrow points to a 2019 Yale University study that shows automating some of the tasks for drivers could make the industry more desirable and create as many as 140,000 new local truck driving jobs by 2030.

DHL’s Monkmeyer told TT that his company decided to go forward with Ike because he believes it will make roads safer and eventually improve drivers’ working conditions.

“It’s the longhaul that is the least desirable for the driver,” Monkmeyer said. “It’s where accidents happen when people are on longhaul routes, and they get tired, and it’s something that autonomous trucks will be able to solve pretty easily.”

DHL says it will take delivery of the trucks over three years. The company has reserved several hundred vehicles, and eventually 10% to 15% of its fleet of 1,200 tractor-trailers will utilize Ike’s technology.

Before founding Ike, Woodrow worked on self-driving truck technology at Uber. He says this partnership is one step in convincing the trucking industry and the public that autonomous technology can be significantly safer than what’s being used today.

“We need to earn that trust. We need to show that the technology we build is safe and is going to result in improved productivity and improved safety outcomes, and we’re hard at work on the foundation of that,” Woodrow said. “We’re not going to prove to anyone that this technology is ready in any commercial way today. It’s not. We have more work to do.”

While the trucks are being rolled out, Ryder says extensive amounts of data will be collected to monitor how they perform.

“The industry is experiencing major disruption with ever-escalating consumer and business demands, regulatory and safety pressures and growth of e-commerce, as well as the rise of the sharing economy,” Ryder Chief Marketing Officer Karen Jones said. “We are at the forefront of identifying new technology and fleet advancements while acting as an extended research and development arm for our customers.” 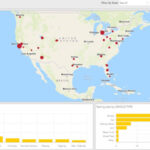