They don’t get distracted and they don’t get tired behind the wheel – that’s the idea behind autonomous semi-trucks.

Aurora, the latest tech company to announce it is testing autonomous vehicles in North Texas, said it will first launch with a fleet of minivans to test commercial routes. Then, it will add big rigs.

It’s unclear which roads Aurora plans to take and when. A press contact for Aurora tells NBC 5 by email the company is not yet sharing additional details beyond this announcement earlier this month.

Aurora isn’t the first to expand its developing and testing to Texas. Companies like Waymo and Kodiak Robotics have also worked to stake a claim in the Lone Star State.

“A huge amount of all of the goods across the United States come through Texas. It just makes sense to have companies here in the state working towards these solutions,” said Bob Brydia, a Senior Research Scientist with the Texas A&M Transportation Institute.

Tech companies are racing to corner the market – especially in Texas, where a 2017 law paved the way for automated vehicles on Texas roads. The vehicles have to follow the traffic and vehicle registration laws that apply to other drivers, but there aren’t additional regulations for autonomous vehicles.

Before that can happen, autonomous vehicles would have to show they are safer. Brydia said public acceptance will be a challenge if autonomous vehicles can’t demonstrate a perfect safety record. Current testing happens with a human safety driver in the cab.

“If you look at the vehicles that are being tested today, they’re level four which means they have a safety driver in them at all times. The safety driver is poised to take over the vehicle if the vehicle is operating outside of the parameters for which it was currently designed for,” explained Brydia.

Dr. Gopal Gupta, co-director of UT-Dallas’ Center for Applied AI and Machine Learning believes trucking may be the first to go fully autonomous – much sooner than passenger cars.

Gupta explains semis can travel a fixed route on a highway where it shouldn’t encounter pedestrians, traffic lights or other challenges associated with city driving.

“I wouldn’t be surprised if we see these trucks making deliveries in the next maybe two, three years,” said Gupta. 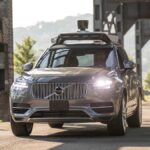