A Coventry-based driverless vehicle specialist has beaten off some of the world’s
largest car brands and manufacturers to secure Autocar’s Innovation Award.
Aurrigo, which is set to start its first autonomous shuttle trial at Cambridge Business
Park in October, was recognised by the car magazine for the way it has made major
breakthroughs with its 4-seater Pod Zero and pioneering work with British Airways
on an autonomous luggage dolly serving Terminal 5 at Heathrow Airport.

A high-profile judging panel cited how the Midlands manufacturer is taking on and
leading businesses ten times their size in the race to break down the boundaries of
autonomous vehicles and potentially changing the way people are transported on the
first and last stages of their journey.

“Autocar is like a bible for the automotive sector and to have our work recognised
among such massive names is a fantastic achievement,” explained David Keene,
CEO of Aurrigo. 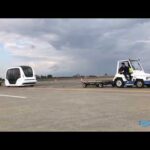