A second-generation Freightliner Cascadia awaits nightfall at the company’s proving grounds in Madras, Ore. Note the sensor clusters on the front bumper and above the cab. (Photo: Jack Roberts)

MADRAS, Ore. — It was Daimler Trucks that lit the autonomous trucking fuse when its self-driving Inspiration truck drove itself across Nevada’s Hoover Dam in 2015. The splashy press reveal set off a debate that still rages today about the If, How and When merits of autonomous trucks.

Five years on, Daimler is dialing down the rhetoric and focusing on a more deliberate, nuanced, development program that puts driver safety at the center of its autonomous trucks R&D program.

At a press briefing attached to the official press reveal of the new Western Star 49X Class 8 vocational truck, Daimler Trucks North America (DTNA) autonomous vehicles director and project leader Anika Friesinger briefed journalists on the current status of the company’s efforts and its new collaborations with both Torc Robotics and Waymo.

Friesinger noted that DTNA is now refining its second-generation autonomous truck, based on its current new Cascadia Class 8 on-highway tractor. Two recent versions of the autonomous Cascadia trucks were on display at company proving grounds in Oregon, and both provided hints as to how this emerging technology will change truck designs in the coming years.

Most noticeable on the tractors were large, front bumper assemblies – similar to aluminum cattle pushers common on trucks running in areas with wild game and farm animals – and large, circular-shaped lidar clusters mounted above the cab doors on both sides of the trucks.

These assemblies are essentially sensor housings, packed full of cameras, as well radar and lidar systems that constantly feed operational telemetry to the truck’s on-board computers, as well as the Detroit DT automated transmission.

It is worth noting that automated transmissions have evolved to become the “brains” of a modern tractor-trailer. And autonomous technology has taken the capabilities and responsibilities handled by these remarkable vehicle systems to levels of data management and operational commands that were unimaginable a few years ago.

As Daimler engineers have learned more about the current capabilities and limitations of autonomous technology, Friesinger said that the company has moved to focus more on driver safety and freight efficiency as the main drives of its R&D efforts on the autonomous front.

“We believe that our recent developments, the advent of Level 4 autonomous technology will revolutionize how our customers operate Class 8 trucks in long-haul fleet operations,” Friesinger said. “And we have also come to understand that we need strong partners in order to bring this technology to market. Which is why we began working with Torc Robotics one and half years ago and have since acquired a majority stake in that business. And that partnership has paid off, helping us to develop many of the safety features found on these autonomous Cascadia trucks.”

Friesinger also pointed to DTNA’s ongoing partnership with Luminar – a new autonomous tech partner for the OEM, which has played a key role in developing the lidar sensor clusters located above the Cascadia’s cab, as well as the onboard lidar systems and their integration into the vehicle’s powertrain and autonomous control system. She also noted that the company’s new relationship with Waymo is quickly getting up to speed as well, and already bearing fruit in terms of refined vehicle control and safety systems.

Safety is the priority

“At all times, safety is our utmost priority,” Friesinger added. “And that means that compared to other companies today, we are not always very aggressive in messaging when it comes to out latest developments. That’s because we feel it is more important to have safe and reliable vehicle ready for fleets when technology is perfected.

“That is why you do not hear much from DTNA these days talking in terms of a timeline or years when this technology will become available. Our position is that autonomous technology must be safe and reliable before we will make an announcement along those lines.”

“We want to understand fully how this technology will fit into their businesses. We are interested in both how they are moving freight today, which business models – hub-to-hub, for example – will be the prime candidates for autonomous trucks when they are ready for deployment in North America. So, there is quite a bit of evolution in our thought processes going on today as we work on this technology.”

That evolution of thought is also occurring on the fleet/customer side of the equation as well, Friesinger added. “Our customers are turning to us more and more now with questions about the future of autonomous technology and how they can prepare for it,” she said.

“For example, we are getting questions about that kind of trailers fleets should be buying today, and what features they should have, so they will be compatible with autonomous trucks when they do appear in the future.”

Friesinger stressed, however, that the road forward will not be easy for DTNA engineers, particular when considering the acutely harsh Canadian weather and the rough highway conditions – often without clear road markings – that Canadian fleets deal with on a daily basis.

“It will take time before autonomous technology overtakes manual vehicle control and begins to move large volumes of freight,” she said. “We have much to learn about how these systems perform in ice and snow, and how operations and infrastructure will adapt to deal with routine emergencies such as flat tires and pre-trip inspections.”

There is still much to learn, Friesinger noted. But, regardless of predictions and timelines, DTNA is convinced that autonomous technology will be a vital fleet management tool in the not-so-distant future – and that the company is determined to deliver systems that will help its customers move freight both more safely and efficiently when the technology is ready. 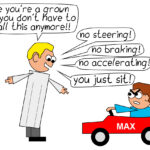