An overlooked announcement by Intel at CES 2022 may well be one of the biggest yet for the autonomous vehicle (AV) industry.

Intel had several announcements timed with the event, but investors began to take notice a week afterward that Intel’s Mobileye unit is working with Zeekr, an electric vehicle maker, making a consumer-grade EV anticipated to debut in China in early 2024. With that arrival, it would be the first consumer AV with L4 autonomy, one of the highest levels.

L4, or Level 4, is a designation by the Society of Automotive Engineers of levels of automation ranging from no automation to L5, known as full automation. L4 is broadly described as a vehicle that can assume all driving tasks under nearly all conditions without any driver attention, while L5 would be a vehicle in charge of all driving tasks without the need for human intervention.

The appearance of an L4 vehicle as early 2024 could potentially shake up an industry that is widely perceived to be led by Tesla with hundreds of thousands of L2-plus vehicles on the roads already.

Putting out a vehicle with Mobileye technology in 2024 would give Mobileye “a substantial technology and first-mover advantage,” wrote Arne Verheyde in an an analysis for investors in Seeking Alpha on Monday.

Verheyde also praised Mobileye’s achievements with its SuperVision autonomous driving system and its launch of a robotaxi business in Tel Aviv and Munich in mid-2022. Taking note of the tech announcements, Verheyde said Mobileye’s IPO also in mid-year “provides investors with potentially one of the best investment for the coming decades,” and declaring “autonomous driving is quickly becoming a commercial (and profitable) reality.”

Intel shares rose slightly during CES and on Monday morning Jan. 10 had reached $53.89, compared to its high for all of 2021 at $68.26 on April 9. It isn’t clear if the Zeekr news has had a significant impact on Intel shares.

Mobileye is in direct competition with Nvidia and Qualcomm, among others, on the microchips that will be used to process data flowing through AVs. The planned Zeekr L4 AV will be powered by six EyeQ5 SoCs to process Mobileye True Redundancy sensing, Responsibility-Sensitive Safety-based driving policy and a new open collaboration model on Road Experience Management mapping technology.

Zeekr is a brand of Geely Holding group based in Hangzhou, China,, which delivered its first Zeekr 001 EV in October after being founded in early 2021. Zeeker uses Sustainable Experience Architecture (SEA), which will be used in the upcoming L4 vehicle for redundant braking, steering and power under what Intel called an “open EyeQ” concept for efficient integration with Zeekr software. Mobileye also announced it will enhance its China-related R&D and will set up a local data center there.

Verheyde argued that Mobileye’s SuperVision is more efficient than software from other companies. SuperVision is deployed in the Geely Zeekr 001 but only uses two Eyeq5 SoCs for a performance of 30 TOPS. That would be 30 times less compute resources of other cars currently in production but with the same or more advanced capabilities. It also uses three times fewer sensors since it is camera-only, with seven cameras and four parking cameras. “Mobileye has proven for years that it can do more with less,” Verheyde noted.

Mobileye also has another architecture for future AVs that employs lidar and radar sensors. In the L4 vehicle, Mobileye will combine the camera-only SuperVision system with a second system based on lidar and radar. The first L4 Geely Zeekr for 2024 will be based on 6 EyeQ5 SoCs, Intel said, providing 120 TOPS. 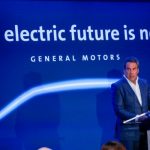